Mr. Abdulbari Khpalwak son of Mr. Abdul Hameed has been born in Maidan Wardak province in an educational and religious family.

He started his primary and secondary school at Ghazi Abdul Kabir Khan high school in 1377 Hijri.

In 1388 Hijri, he entered in general entry test of universities and found the way to Kabul Educational University.

In 1392 Hijri he was selected as the executive manager at Jamia Complex Medical Institute and after a while he was chosen as academic manager that Institute.

In addition to his lecturing he was chosen as Academic Deputy at Shifa Institute of Higher Education. 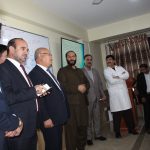